Professor Banji Akintoye has accused the Nigerian Government of hiring some black foreigners living in the United States of America to sta... 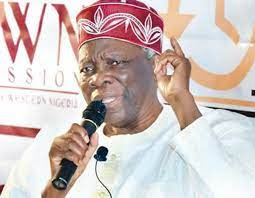 Professor Banji Akintoye has accused the Nigerian Government of hiring some black foreigners living in the United States of America to stage a Pro-Buhari protest and One Nigeria March opposite the United Nations Headquarters in New York on Friday.

An unnamed top government officials from Kwara State and a popular journalist were accused of allegedly paying $500 to black foreigners to stage counter protest against Nigerian Indigenous Nationalities Alliance for Self-Determination (NINAS).

Recall that Nigerian Indigenous Nationalities Alliance for Self-Determination (NINAS), under the leadership of Prof Akintoye had staged a “Million-Man Freedom March” on 14th and 15th of September opposite the United Nations Headquarters.

The grand finale of the NINAS Million-Man Freedom March holds on Friday September 24, the day President Muhammad Buhari will be addressing the 76th Session of the United Nations General Assembly.

The group has been describing the 1999 Constitution of Nigeria as a fraud against the people of South and Middle-Belt, saying,“it was enacted without the consent of the people”.

NINAS is also demanding from the United Nations to declare Miyetti Allah as a Terrorist Organisation, alleging that it has openly taken responsibility for series of genocide in the South and Middle-Belt regions.

Prof Akintoye in a statement made available by NINAS’s Director of Public Communications, Maxwell Adeleye, said the will of the people shall prevail no matter how the Nigerian Government try to scuttle the Grand March.

He accused a top Nigerian government official and a popular Lagos journalist of currently hiring foreigners to masquerade as Pro-One Nigeria Protesters to counter NINAS in New York on Friday.

“The Friday Grand March in New York shall be historic, hence, the Nigerian government is jittery. The Ring Leader of Government Officials from Kwara State and a top Lagos Journalist are now in New York to start hiring black people who will pretend as Nigerians to stage a Pro-Buhari and One Nigeria Protest to counter NINAS on Friday.