The former France defender disclosed that he has acquired both B and A licences after undergoing management courses at United’s Carrington training ground.

The 40-year-old used the opportunity to thank the Premier League club as well as DBU Fodboldskole for the achievement so far.

“B Licence. A Licence. I would like to say a massive thanks to the clubs Man United and DBU Fodboldskole for letting me take over.

Patrice Evra joined the Red Devils back in January 2006 from French Ligue 1 side Monaco for about £5.5million.

He featured in a staggering 379 games before leaving for Juventus in 2014.

And he recently spilled the beans that former United manager Alex Ferguson wanted to re-sign Cristiano Ronaldo before his retirement in 2013.

"I remember there was a lot of media saying Ferguson will maybe retire next year, and he said, 'Patrice, I will never retire. I will be here another 10 years’.

“And to be fair, when I speak with Cristiano, I ask him and he said yes to the boss, and was coming to join United. He told me this.” 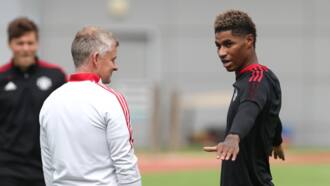 Meanwhile, a former England star Tim Sherwood has disclosed that Cristiano Ronaldo will become a manager at Manchester United about 18 months from now.

The former Blackburn Rovers and Tottenham midfielder believes the Portuguese sensation is prepared to take the hot seat at the Old Trafford club.

According to Sherwood, CR7 is prepared to walk into management as soon as he retires, and a glimpse of that transpired during United’s 2-1 win over West Ham United in the Premier League on Sunday.

Legit.ng earlier reported that the manager of Barcelona football club of Spain, Ronald Koeman, has branded ex-captain Lionel Messi as ‘a tyrant’ who wants to win everything; even in training.

The Argentine legend was forced out of the club following financial problems between the club and the La Liga board during the summer.

According to Koeman, Messi’s attitude in training spurred his teammates to become better players, helping to raise the standard of their game as a unit.