Father of three turns to receive call, returns to living room to find out his girls messed it with flour

A man was in the living room with his three little kids and excused himself to take a call only to return and find something shocking to him.

This is as the kids coated themselves in flour as well as the whole living room.

Daily Mail reports that their father identified as DJ Abz Musa made the discovery after one of them aged one rushed into the bedroom covered in flour. 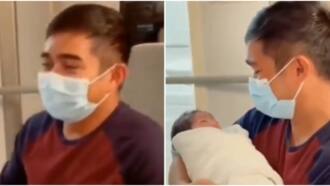 Abz said he was speechless

Reacting to the mess made by his daughters Nalah (the oldest who is 2 years old), Sadè and Mallie (twins who are aged one) Abz said:

"They were watching the film Vivo. Nobody was crying so I thought everything was OK - then my youngest twin Mallie walked into the bedroom covered in flour.

"When my daughter walked in I couldn't even speak. My sister took screenshots."

The 34-year-old was said to have filmed his discovery and sent to his wife on the family social media platform where they had great laughs about it.

Afterwards, he cleaned them up as well as the whole messed up area.

Meanwhile, Legit.ng previously reported that a woman had shared a video of her little daughter making a big mess.

In the short clip of her baby girl who found her way into what looks like a container of porridge. The little girl then decided to spew the porridge everywhere, including her cute little face.

After getting caught red-handed, the little one had to 'face trial' by camera-wielding mummy. She didn't seem too phased, however, trying to answer her mum who just wanted to know why she decided on making the big mess.