BBNaija Season 6 star, Yousef Garba, is basking in his newfound fame after getting evicted from the reality show.

The ex-housemate started his media rounds like his other evicted co-stars and was surprised to see a crowd of excited fans waiting for him.

In a video shared on Yousef’s official Instagram page and sighted by Legit.ng, a crowd of screaming fans were very pleased to see him and stretched out their hands to wave at the BBNaija star.

Yousef who stepped out of a building was very pleased to see them. He initially covered his face in disbelief and eventually entertained the crowd with his signature dance moves in the BBNaija house. 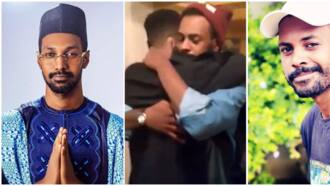 They're so cute: Reactions as Yousef reunites with his lookalike brother amid tears in a heartwarming video

The reality show star also made the day of some of his fans by taking photos and making videos with them.

After videos of Yousef’s fans welcoming him made the rounds on social media, internet users shared their mixed reactions to it.

Read some of their comments below:

“How did they know he was there tho.”

“Proud of you Yousef!”

“Sometimes I feel like they arrange or pay this people to come and shout cos I can’t even think of going out just to stay behind one gate to go and shout.”

Yousef reunites with lookalike brother after eviction from BBNaija 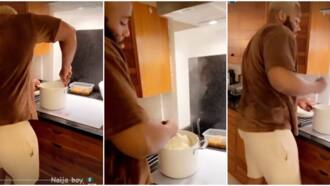 Yousef stirred emotional reactions from his fans and followers in the online community following a video shared on his Instagram page.

The Shine Ya Eyes housemate who left the house during the last Sunday live eviction show was seen getting reunited with his brother and other supporters.

Yousef and his lookalike brother hugged it out for some time with the housemate getting emotional at a point in the video.