Anambra 2021: Battle to take over from Obiano begins as APGA flags off Soludo's governorship campaign

Awka - Ahead of the forthcoming governorship election in Anambra state, the All Progressives Grand Alliance (APGA) has flagged off the election campaign of Professor Chukwuma Soludo, former governor of the Central Bank of Nigeria (CBN).

Channels TV reports that the rally took place at the Alex Ekwueme Square in Awka, the state capital on Saturday, September 25.

Soludo, was formally presented as the candidate of APGA in the November 6 election, a routine act that signifies the politician is the authentic candidate of the party.

Those present at the event include the incumbent Anambra state governor, Willie Obiano, his wife, Mrs Ebele, and APGA National Chairman, Victor Oye. 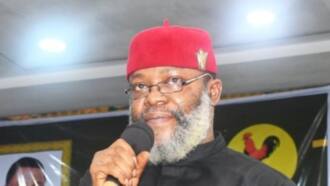 The couple, Soludo, his wife Mrs Nonye, and Oye among the people who took turns to address the crowd of party supporters at the event.

In another report by The Cable, Soludo assured his supporters that their votes will count. The former Central Bank of Nigeria (CBN) governor speaking at the commencement of his campaign said Anambra isn’t Imo state.

According to him, Governor Willie Obiano has done very well for Anambra,state, which is why the people want the party to continue.

Earlier, the senator representing Anambra North at the Senate, Senator Stella Oduah declared that the ruling APGA would be defeated in the next governorship poll in the state.

She said that no person or political party can stop the All Progressives Congress (APC) from winning the November 6, election. Oduah promised to deliver the zone to APC and the governorship candidate, Senator Andy Uba during the election.

Meanwhile, the director-general of the African Democratic Congress (ADC) governorship campaign organisation, Dr. Harris Chuma-Odili has resigned from the party and active politics.

Chuma-Odili made this known in a statement he issued and sent to the party’s governorship candidate, Nze Akachukwu Nwankpo and national chairman, Chief Ralphs Okey Nwosu.

He explained that his decision to quit effective from Wednesday, September 22, was to allow him take on some new challenges.