The video of some secondary students expressing love to themselves in the school compound as people gathered around filming them has stirred massive reactions on social media.

A man with the social media @Germanprinz condemned such a show of love among young one, wondering how the world at such 'westernized' act.

He asked who is in charge of the school where such a thing took place. In the video, students gathered around a student as he knelt holding a bouquet. Man gave me his business card instead of collecting my number - Lady laments in video, seeks advice

A teenage girl walked towards the boy and hugged him with the flowers. The audience erupted in wild jubilation.

There were some other students who acted as instrumentalists to give the occasion some music. The video has gathered mixed reactions.

"We have a 21 year old in BBNaija house with hundreds of tattoo and piercings, showing Virgina and kissing different people here and there."

"This isn't right in the presence of the extremely young ones present there. My thought tho."

"Its just prom. Let them be please."

"This bro should just geddifok, if we want to even follow culture or tradition, almost all 18 yo girls would have been married rn. Bro should go and take a chill pill and let them have fun." 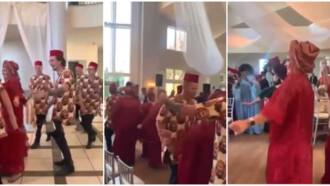 "If it's true love.its okay....l support it, but the both must protected.. And must further there education, for dem to get to the finish line..."

Meanwhile, Legit.ng earlier reported that a young man, Bayo Lawal, has narrated the story of how he met his wife many years ago in 2013. His story inspired many people.

In a lengthy LinkedIn post, the young man said that after he had gone to church to seek the Lord’s face for direction, he saw a beautiful lady walk in.

At the sight of her, he said that his heart skipped. Weeks after that encounter, the lady came back to the same church to worship.