The Nigerian navy says some neighbouring countries do not have armouries, making it difficult for Nigeria to fight arms proliferation. ... 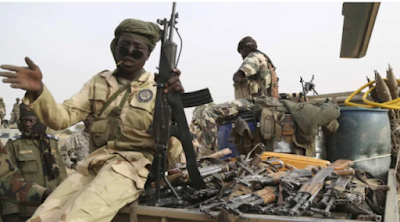 The Nigerian navy says some neighbouring countries do not have armouries, making it difficult for Nigeria to fight arms proliferation.

Awwal Gambo, chief of naval staff, who was represented by Jemila Sadiq Abubakar, a commodore, spoke on Monday at a public hearing organised by the house of representatives committee on national security and intelligence on the consideration of four security bills.

While making a contribution to the bill seeking to establish a national commission against the proliferation of small arms and light weapons, Abubakar said the weapons donated by developed countries to neighbouring nations are “compounding” Nigeria’s security challenges.

She said the lack of armouries in some of the neighbouring countries makes arms available to their security operatives who in turn sell it off when they are “broke”.

“Section 9 (1) suggests an additional function of proposing a seized weapons and arms be used by security agencies; I think we can look at the provisions of the international convention on the issue of how the arms should be used when seized,” she said.

“I want to contribute to the coming seminar on the operation of arms to be organised by the house of representatives.

“I was in charge as a member of the fight against Boko Haram and I can tell you categorically here, I stand to be corrected, that some of these countries that we have borders with have no armoury.

“They do not have armoury. So most of their arms that are being donated by — I don’t want to be specific — the developed countries in the name of assisting us are compounding our problems in Nigeria because you find out that each average Chadian soldier has 20 to 30 arms underneath his bed. When he is broke, he brings it out and sells it for $30, $20. I am here, I am standing here, and I am saying it.

“Since we are going to collaborate with ECOWAS and other countries that are donating such arms to these countries, I think we should insist that they should either enact laws to govern the handling of these arms and ammunition or build an armoury for these countries or else we will not see peace.”

Speaking on the bill to establish integration of private close circuit television (CCTV) to fight insecurity, Abubakar said: “I think we should build a wall between us and these neighbouring countries or we should have serious surveillance or else we will not see peace in this country. I am telling you this, I have been in that area for years, so I know what is happening.”

Speaking earlier, Femi Gbajabiamila, speaker of the house, said “knowledge would be drawn from everywhere,” because security is an important national issue.

“The security agencies are welcome to make submissions but everyone is welcome to submit as well. I say so because I want to underscore the fact that security is about everyone and we are all stakeholders,” he said.