The Northern States Governors Forum and Northern Council of Traditional Rulers, met in Kaduna to critically look at how to tackle banditry... 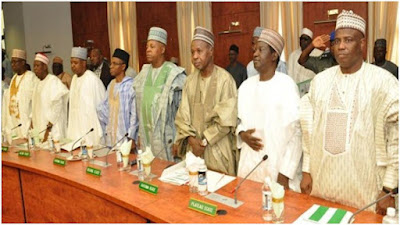 The Northern States Governors Forum and Northern Council of Traditional Rulers, met in Kaduna to critically look at how to tackle banditry, kidnapping and insurgency.

The controversy around Value Added Tax collection and other burning national issues will be given prominent attention at the meeting.

The chairman, Northern States Governors Forum and Governor of Plateau State, Mr Simon Bako Lalong while declaring the meeting open said, “We shall also take a critical look at some new national issues that have emerged over the recent months and weeks with a view to coming up with a position of the region as well as adopting the best possible approach to ensuring that the interest of the region is protected and promoted. Key among them is the issue of Value Added Tax collection and the surrounding controversy.”

“After hours of exhaustive deliberations, we arrived at several resolutions bordering on improving the security of our region; enhancing socio-economic prosperity of the people; addressing humanitarian challenges of internally displaced persons; building synergy with the Federal Government and our counterparts from other parts of the country among others.”

The chairman explained that the forum also received various reports from the Committees earlier constituted and resolved to look into the reports for implementation and various presentations were also made by individuals and corporate organizations for the development of the region.

He stated, “Today’s meeting is essentially to get an update on the progress made so far on some of those items particularly on addressing insecurity which is still a major concern in the region, adding that they shall take stock of how far they have gone in tackling banditry, kidnapping and insurgency and also chart the way forward.

He added, “As usual, I look forward to robust contributions from all members that will lead us to arrive at very meaningful conclusions that will impact positively on the fortunes of our people. Once again I welcome you to this meeting and look forward to successful deliberations.”