The Federal Government has mandated the Nigerian Armed Forces and other security agencies to eradicate insurgency and other acts of crimin... 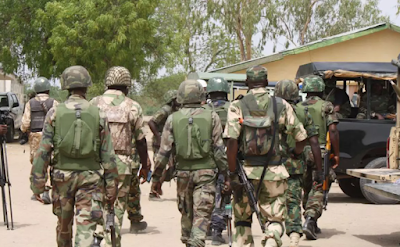 The Federal Government has mandated the Nigerian Armed Forces and other security agencies to eradicate insurgency and other acts of criminality bedevilling the country.

This was disclosed at the weekend, by the Chairman, House of Representative Committee on Defence, Babajimi  Benson, during an interview with journalists,  at the Passing Out Ceremony of the Nigerian Armed Forces Resettlement Centre Trainees Course 2/2021, held at the resettlement centre, Oshodi, Lagos.

To meet this deadline, he disclosed that payment had been made for inventories, both software and hardware.  He also disclosed that the proposed Armed Forces Support Trust Fund would go a long way to providing needed platforms to eradicate insurgency and its likes in Nigeria.

According to him, “There is a March 2022 deadline for Armed Forces to eradicate all these insurgents and the likes. Payments have been made for inventories, both software and hardware, it will take time for them to come into Nigeria.

“The Armed Forces support trust fund was moved by me, it is my bill and we are currently at the 3rd phase which means that we want to consider a report that we wrote, then we will sign up and send it to the Senate for concurrence.

When we resumed we worked on the PIB, electoral act, very soon we will get to that bill”.

He attributed poverty and climate change, which he said forced herders to move their cattle from the North to the South, to the main cause of insecurity in the country.

To address this, he said,” We, the political leaders, have to fashion out economic development programs that would stop the breathing of people who are indoctrinated to do bad things. The government is trying to uplift 100 million people out of poverty. The plans are ongoing.

The Federal government has about 870 projects that are going on at the same time. So in the fullness of time, insecurity will be reduced by economic activities”

He however kicked against amnesty for repentant Boko Haram members, saying, “People who have perpetrated crimes, those who I call terrorists should not be given amnesty, the full wrath of the law should be melted out on them”.

The retirees are going into civil society and we have a lot of intelligence that they can give us to assist us in fighting insurgents. We want them to work for us as a source of intelligence and also try to sensitize the community on what the service has been and why society needs to support us.

Also speaking with journalists,  Chief of the Air Staff,  Air Marshal Isiaka Amao, said that the 350 retiring servicemen who underwent 12 weeks of intensive training, assist the Armed Forces in intelligence gathering as they retire back to civilian life.

He said, “The retirees are going into civil society and we have a lot of intelligence that they can give us to assist us in fighting insurgents. We want them to work for us as a source of intelligence and also try to sensitize the community on what the service has been and why the society needs to support us”.

Admonishing the graduates, the CAS said, “The contemporary global economic and national security climate is dynamic and presents peculiar challenges for post-service life now and in the foreseeable future.

Bearing this in mind, I enjoin the graduating trainees to leverage all the knowledge, skills and expertise you have acquired over the last 12 weeks and during your meritorious service to our beloved nation.

Remember that no knowledge is a waste! There is no doubt that alongside entrepreneurial training and vocational skills acquisition, the virtues of discipline, integrity and patriotism which are fundamental to our national and defence development, have been reinforced throughout every phase of your course in this institution and during your respective Service lives.

I, therefore, encourage you all to henceforth, harness the skills and expertise obtained during their training to lead productive lives that will engender societal progress and national socio-economic development.

Earlier in his welcome address, the Commandant, NAFRC, Air Vice Marshal Adamu Idris, explained that the  Passing Out Ceremony formally marked the successful completion of another Servicemen Pre-Discharge Course.