Big Brother Naija Shine Ya Eye housemate, Pere, has reacted to a twist between him and Angel to battle as finalists for the show, stating ... 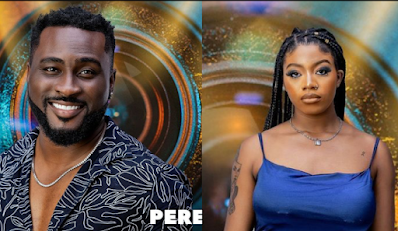 Big Brother Naija Shine Ya Eye housemate, Pere, has reacted to a twist between him and Angel to battle as finalists for the show, stating that he feels it’s a tie-breaker.

He said this on Monday, day 65 of the show, as the duo waited in the ‘white room’ for their task to commence.

This happened after Pere and Angel who had faced fake eviction during the live show were pitted against each other for them to continue as finalists on the show.

The duo was isolated in a ‘white room’ in the BBNaija house and had to battle their way back into the show through ‘trucks and screwdrivers’, according to Biggie.

As they wait for the game to commence, the duo discussed the possible reason for the twist and Pere said he feel it’s a tie-breaker.

Pere said, “I feel this is a tie breaker.”

Angel retorted, “Ha. The chances of us tying are very very slim.”

“But the possibility is there but I think is a tie-breaker. I don’t know why they are doing this just to get a tiebreaker,” Pere said.

The 21-year-old writer answered, “I don’t know but I don’t feel like breaking any tie. What is the possibility of having the same exact votes? It’s not possible.”

Outside the show, however, Pere’s team had stated that the twist threw them off balance while Angel’s dad alleged that his daughter has received fearful threats due to the twist.