Bobrisky has mentioned how he likes controversies and how they help him trend but the past few days for him have been nothing but call outs and spilling of unpleasant secrets.

The latest person who has taken to social media to call out the crossdresser is kayanmata seller, Omoshola who replied claims of gold diversion by Bobrisky.

The aphrodisiac seller started by noting that Bobrisky fabricated lies against her just to satisfy his greed and even had the guts to bring her family into it. 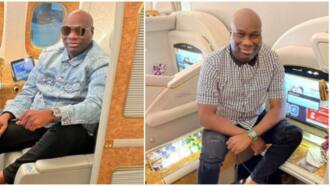 Omoshola continued by reminding the crossdresser about the time he begged her at a police station in Abuja and even had his ex-bestie whom he betrayed, Tonto Dikeh beg too.

The entrepreneur debunked all Bobrisky's claims and vowed to deal with him, she also taunted him with the fact that he does not have a bestie to beg for him.

"These people just de lie. 150 million for 3years which means a year endorsement is 50m. Mad people everywhere. How much will you now pay Davido? Or other sensible celebrities."

"God of Tonto Dikeh I see you."

"Can they just allow Tonto to rest, all this nonsense tagging here and there." 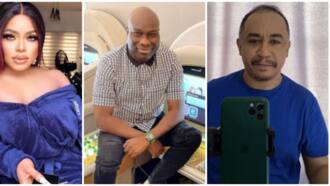 We are just friends: Bobrisky and Mompha hold conference call with Daddy Freeze to debunk allegations

"How do you people even do biz with bob sef, Una get mind sha."

Things took another turn for popular crossdresser, Bobrisky, after a jeweler, Engr Mrs Shyllon Adeola, called him out on social media.

The businesswoman took to her page to accuse the crossdresser of refusing to pay the millions he owed her after purchasing gold jewelries.

According to the vendor, Bobrisky had the audacity to use the gold jewelries he hadn’t paid for, for his birthday photoshoot and had the mind to call out someone else for owing him.