Asaba - Governor Ifeanyi Okowa of Delta has expressed deep sadness on the demise of legal icon and Justice of the Supreme Court, Justice Samuel Oseji who is from the state.

Oseji, who was sworn in as a justice of the apex court in Nigeria in November 2020, hailed from Idumuje-Unor in Aniocha north local government area of Delta. He died at 67 on Monday, September 27 in Abuja after a brief illness. 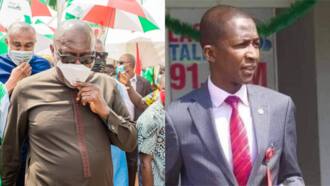 In a statement by his spokesman, Mr. Olisa Ifeajika, on Tuesday, September 28, Okowa commiserated with the Supreme Court of Nigeria, the people of Aniocha and Idumuje-Unor community over the passing of the outstanding jurist and statesman.

He described the late Oseji as a quintessential and intellectual jurist whose pronouncements on the bench had advanced the course of justice delivery in Nigeria.

According to the governor, the deceased was a well-respected and humble jurist whose trust in God and passion for justice with unassailable integrity took him to greater heights in his career and life.

“As a bastion of knowledge and inspiration, a man of great wisdom and insight, Justice Oseji contributed immensely to the development of our country's jurisprudence in the several capacities he served. 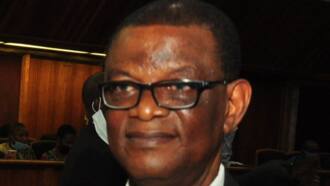 “As a government, we acknowledge his role and efforts as first substantive Chief Registrar of Delta state judiciary and later as Judge of the High Court of Delta, before his elevation to the Court of Appeal in 2010.

“In acknowledgement of his distinguished accomplishments in life, especially his elevation to the Apex Court in Nigeria, and in appreciation to God, the late Justice was honoured by his Idumuje-Unor community at a grand reception in December 2020.

“On behalf of the government and people of Delta, I mourn the exit of a great statesman and distinguished jurist, Honourable Justice Samuel Chukwudumebi Oseji, whose humility and fountain of knowledge have remained an inspiration to many.”

The statement noted that Governor Okowa cancelled all official engagements for the day in honour of the late Justice Oseji.

Recall that the entire Delta state government was recently thrown into mourning following the death of Mary Iyasere. Until her demise, Iyasere was the special adviser on entrepreneurship development to Governor Okowa.

Iyasere was formerly the commissioner for commerce and tourism during the governor's first term in office.