Nigerian striker Taiwo Awoniyi has finally been inducted into the Super Eagles ahead of their World Cup qualifying encounter against the Central Africa Republic at the Teslim Balogun Stadium.

The induction was done on Wednesday night, October 6, at the Eko Hotel where Taiwo Awoniyi was called out by the Super Eagles captain Ahmed Musa for him to sing for his teammates.

Super Eagles players were actually expecting Taiwo Awoniyi to sing a song they would all join him in, but the former Liverpool star decided to follow his mind according to the video posted by the Super Eagles. 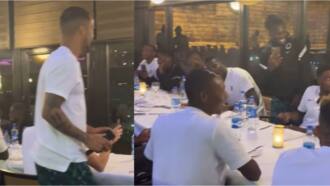 Eagles stars turn dining table to drum, hit spoons and plates as they sing praises ahead of CAR clash

Taiwo Awoniyi sang the music of popular Nigerian singer Nathaniel Bassey titled 'Call On Me', but it appeared boring to his Super Eagles teammates as they were unable to flow with him.

Awoniyi's incredible performances so far this season for Union Berlin in the German Bundesliga earned him a call-up into the Super Eagles even though he had to replace injured Terem Moffi.

Meanwhile, the Super Eagles completed their training session on Wednesday night, October 6, and Gernot Rohr and his wards are ready for the big battle.

Speaking to Legit.ng about the Super Eagles readiness for the match against CAR, Pascal Patrick who is the team's coordinator stated clearly that there is no issues in the camp.

''I can confirm to you that all the players are very serious and they want to play this game like we have no point and I am confident that the boys will make Nigerians proud. 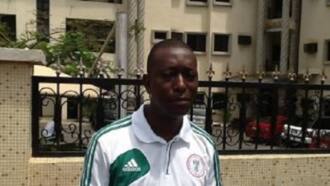 ''The coach spoke with them very well last night and all the players have promised that six points will be gotten against Central Africa Republic as we look forward to qualify for the World Cup.''

Earlier, Legit.ng had reported how Ahmed Musa who is the captain of the Super Eagles has shown his generosity to some ladies while driving on his G Wagon as the former Leicester Star gave them some cash.

These Hausa ladies were inside a tricycle when they saw Ahmed Musa driving his G Wagon worth N100million, and they started praising the Super Eagles captain.

Ahmed Musa looked at the them and had to roll down the glass before giving them some cash and drove off with the ladies in joyous momentum.

There is no doubt about the fact that Ahmed Musa is one of the richest Nigerian footballers considering what the 28-year-old has made thanks to football.