You can’t beg me behind the scene, then come with a petition, Tonto Dikeh replies Janemena 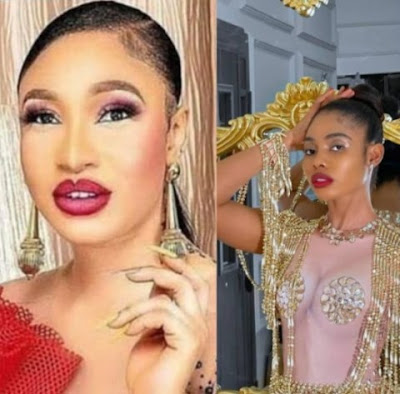 Nollywood actress, Tonto Dikeh, has replied Instagram dancer and influencer, Jane Orezimena, popularly known as Janemena, who demanded the sum of N500m for alleged libel from the actress.

According to Dikeh, Janemena came to beg her for an appointment so that she can explain herself and save her marriage, only for her to come up with a petition.

Taking to her verified Instagram page on Tuesday, Tonto Dikeh said, “If I say your s3.x tape exist, I say it again and again, child. You can’t be begging me behind the scenes to save your marriage and begging to see me for an appointment to explain yourself and then come with a petition.

“I’m not as dumb as your boyfriend so I wouldn’t be releasing your tape nor your call a week ago. See you in COURT.”

This comes shortly after Janemena, sent a letter to Dikeh, demanding the sum of N500m for alleged libel and claiming on social media that Janemena has a s3.x tape.

The dancer also wrote a petition to the Office of the Inspector-General of Police demanding an investigation of criminal libel against Dikeh.

Dikeh had claimed last month that her ex-lover, Joseph Egbriaka Prince Kpokpogri, had a s..3..x tape of Janemena who is married.

But Janemena now claims that due to Dikeh’s allegation and the trauma it caused, she suffered a miscarriage, losing her one-month pregnancy.

The claims are included in a letter signed by Janemena’s lawyers, Felix, Igelige& Associates titled, ‘Re: Libellous statements published by you on your Instagram and Facebook pages – a demand for immediate retraction of the libellous publications, tendering of unreserved apology and payment of N500,000,000.00 as exemplary damages to Mrs. Usiwo Orezimena Jane popularly known as Janemena’

It read in part, “We write you this letter to demand your immediate retraction of your publication referred to above, render unreserved apology to her and pay her N500m as compensation for the callous publications.”

The lawyers said Dikeh’s post suggested that Janemena, who is married, is having a s3xual relationship with Kpokpogri and is cheating on her husband.

The letter partly read, “Janemena is happily married to Mr. Andre Oyeze. She is a native of Isoko in Delta State whose native law and custom forbids a married woman from having s3.xual relationship with another man. Indeed, it is a taboo in Isoko Land, Delta State for a married woman to have s..3..xual relationship with any man who is not her husband.”

The lawyers maintained that no such s..3..x tape exists neither has she ever had a s.3..xual relationship with Kpokpogri.

They said due to Dikeh’s recklessness, Janemena had been brought to “public ridicule, odium and opprobrium in the comity of Isoko women, her business associates, friends, members of her family, etc. The traumatic condition which your publications under reference threw Janemena into caused her miscarriage of her one month old pregnancy.”