A young man has used an everyday motorcycle to perform stunts without any safety measure. Many people were amazed.

In a short video shared by @krakstv on Instagram, the man rode amid vehicles in a hold-up as he showed off his skill.

The rider tilted the bike and rode only on the rear tyre. Just when you think he has done the most, he leaned more backward in a daredevil manner before balancing on both wheels. 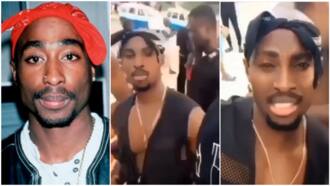 Nigerians who reacted to the video said the man is really brave to pull off such on a commercial bike.

As at the time of writing this report, the video has over 400 comments and more than 21,000 likes. Below are some of the reactions:

"I am not a preacher of doom but I was really scared something bad was going to happen at the end of it."

"They ride like they have extra life at home."

"Omo he did this with an ordinary bike..wow."

"Definition of ride or die."

"Those people are cats with 9 lives."

"I don talk am say na wetin pass my power I want dey do now." 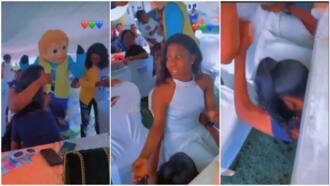 Meanwhile, Legit.ng earlier reported that a Nigerian man with the social media handle @Manlikechisom showed the true meaning of kindness and remembrance as he rewarded a man for his undiluted service to him.

In a post on Wednesday, February 10, the man said that it was a very great day for him as he had the opportunity to bless the bike man in his university with a tricycle.

He said the man rendered great services to him for five years, adding that the rider sometimes carried him for free and on credit.