The Federal Road Safety Corps (FRSC) has officially launched the use of body cameras for its personnel across the country.   The body ... 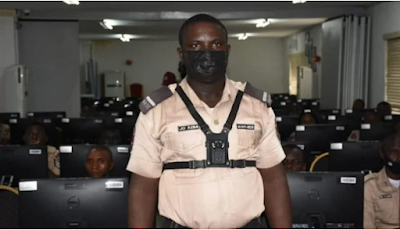 The Federal Road Safety Corps (FRSC) has officially launched the use of body cameras for its personnel across the country.

The body cameras were unveiled on Thursday, at an event held in Abuja.

Speaking at the event, Boboye Oyeyemi, FRSC corps marshal, said the operation monitoring and control platform which was also unveiled alongside the body cameras will contribute significantly to improving the agency’s operations.

“This platform will embrace the ethical imperatives of eliminating misconducts both on the part of the operatives and motorists,” he said.

“It will considerably reduce the incentive to infringe on traffic laws and regulations due to perceived weak enforcement and likelihood of escaping arrest.

“It will assist to improve on road safety management generally with better personnel disposition, among others.”

The FRSC boss added that the agency recorded the highest cases of assaults on its personnel in 2019, but has not recorded such since the test-running of the platform began in parts of the country.

He also said the implementation of the platform would be in phases, adding that the agency has a target of three years for all its patrol teams nationwide to start using body cameras.

“This is phase one which is in FCT, Abuja. Cameras will be deployed to Lagos and Asaba for end-of-the-year patrol operations as well. This will also help to control the behaviour of officers and conduct of the public, ” he added.

On his part, Nnamdi Mbaeri, permanent secretary, general services offices, who represented Boss Mustapha, secretary to the government of the federation, said the development will strengthen road safety management.

According to NAN, Mbaeri commended the agency for the achievement, and said the President Muhammadu Buhari administration remains committed to improving the transport sector.

“It is therefore my hope that today’s inauguration of operations monitoring and control platform and deployment of the body cameras will improve the quality of road safety management approach in Nigeria,” he added.