Adeyeye, a former minister of works, disclosed this in Ado-Ekiti, the Ekiti state capital on Thursday, October 21.

The Nation newspaper reports that he made the comment while inaugurating the parallel APC ward and local executives, adding that the governors have a keen interest in the actualisation of Tinubu’s presidential bid. 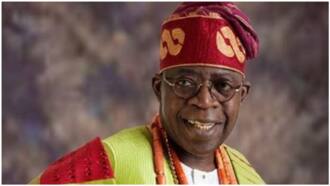 According to him, the state executives were queuing behind the APC stalwart because of what he called Tinubu's administrative acumen, mental capacity, rare leadership quality, and unequalled political structures which cut across the six geo-political zones.

He added that Tinubu is perfectly suitable for the plum position of the number one Nigerian citizen by all standards.

“Asiwaju Bola Tinubu will be the next president of this country and one of us will become the Governor in Ekiti state. I am happy that the new executives have passion for this group and this will lead to action and eventually victory for all of us.

“APC leaders and members across board are using their personal money to fund SWAGA. Members are not after money.

“Let me tell you this, 16 governors are now backing Tinubu for president and they are no longer afraid after Governor Babajide Sanwo-Olu of Lagos state openly supported us when we did the flag off in Lagos.”

Meanwhile, a member of the Tinubu Support Group, Akpan Uttah has expressed optimism that Tinubu will win the 2023 presidential contest.

“Tinubu's presidency would be better for Nigerians if given the opportunity to be the No 1 citizen in Nigeria. He's a born and visionary leader, not those who attained leadership positions by luck or chance, or by where they come from.

“Jagaban is my candidate and I am going to mobilize the electorates to vote for him in my political ward and also the neighbouring wards. I am also going to support him with prayers.”

Meanwhile, the Pan Niger Delta Forum (PANDEF) has called on northern politicians seeking the presidency to wait till 2031.

In a statement issued in Port Harcourt, the Rivers state capital, on Thursday, October 14, Ken Robison, spokesman of the forum, said its demand is for the sake of national harmony and peace.

According to the group, it does not speak well of a unified country if one part of Nigeria keeps on producing its leaders.