Jose Mourinho's Roma were condemned to a 6-1 defeat by Norwegian league outfit Bodo/Glimt in their UEFA Conference League clash on October 21.

The defeat was the Serie A side's first in the competition and it is also the heaviest the Portuguese tactician has suffered in his coaching career.

Erik Botheim opened the scoring for the home team just after eight minutes of action and 12 minutes later, Patrick Beg doubled the hosts' lead as reported by SunSport. 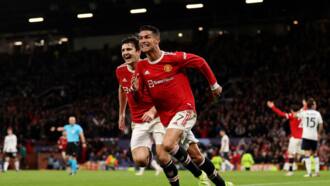 Carles Perez scored Roma's only goal of the game from close range after tapping the ball into the back of the net to reduce his side's deficit in the 28th minute.

Erik Botheim got his name on the scores sheet for the second time in the game in the 52nd minute as Ola Solbakken made it 4-1 in the 71st minute.

Amahl Pellegrino and Ola Solbakken scored twoquick goals in the 78th and 80th minutes to complete the demolition earlier on Thursday but the Serie A side remain second on the log despite the defeat.

Though, this is not Roma's heaviest defeat as they have lost 7-1 to Bayern Munich before, this is however their second joint heaviest defeat having already lost 6-1 to Barcelona before now.

Jose Mourinho's return to Allianz Stadium ended in a defeat following Juventus' 1-0 win over Roma over the weekend.

Moise Kean scored the only goal that separated at the end of the game but that was not the highlight of the game as the Portuguese manager was spotted taunting Old Lady fans.

Reports reveal that the former Chelsea handler held up three fingers as a reminder of the treble he won with Inter Milan at the end of the 2009-10 season.