This development comes days after Lucky Irabor, chief of defence staff, confirmed that Abu Musad Al-Barnawi, the leader of ISWAP.

The Cable reported that Monguno, while addressing newsmen after a security meeting of service chiefs with President Muhammadu Buhari on Thursday, October 21, said Bako was killed two days ago by the military. 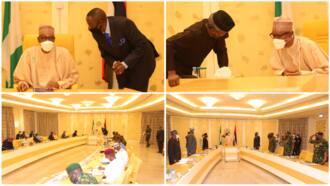 “Two days ago, the man who succeeded him (Al-Barnawi), one Malam Bako, one of the prominent leaders of the Shura Council of the Islamic State of West African Province, was also taken out."

Monguno said the operations being conducted by the troops in the northern parts of the country have put a lot of pressure on ISWAP, Boko Haram and another group known as the Islamic State in the Greatest Sahara.

Meanwhile, amid the battle against insurgency across the north, the Nigerian Army is collaborating with the Russian government for the acquisition of military equipment.

This was revealed on Friday, October 15, by Chief of Army Staff (COAS) Lieutenant General Yahaya Faruk on Thursday, October 14, at the Army's Abuja headquarters during a courtesy visit of the Russian Ambassador to Nigeria, Alexey Shebarshin.

In a Facebook post shared by the spokesman of the Nigerian Army, Brigadier-General Onyema Nwachukwu, COAS Faruk solicited the support of the foreign government in the provision of sophisticated equipment to assist the fight against all forms of terrorism in the country.

Why Buhari must release names of Boko Haram sponsors - Kukah

In other news, the Catholic Bishop of the Sokoto Diocese, Matthew Kukah, has raised concerns about the refusal of President Muhammadu Buhari-led administration to release names of sponsors of Boko Haram terrorists.

The cleric while delivering a sermon at the Priestly Ordination of Five Deacons at the Holy Family Cathedral alleged that the administration is not sincere in dealing with terrorists killing Nigerians.

Kukah on Sunday, October 3, wondered why it is difficult for the government to release names of those sponsoring terrorism. The bishop also declared that Nigeria is a broken country that's decomposing from within, adding that people cannot go on like this.