The Chairman, Senate Committee on Army, Senator Ali Ndume, on Friday insisted that insecurity in the country is reducing with the hope tha... 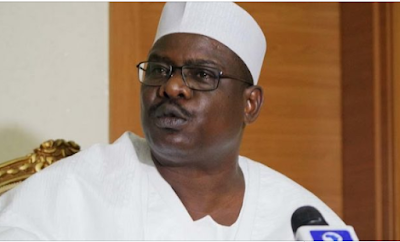 The Chairman, Senate Committee on Army, Senator Ali Ndume, on Friday insisted that insecurity in the country is reducing with the hope that it will completely be eliminated.

Ndume, representing Borno South constituency said this while fielding questions from newsmen after the turbaning of the All Progressives Congress national chairmanship aspirant, Malam Saliu Mustapha, as the new Turaki of Ilorin, today.

He said, “Insecurity is going down, it’s not eliminated. Normally, this kind of a thing is not something that you will just say it is all over.”

Ndume said that the federal government of Nigeria is doing well and doing its best to tackle the challenge of insecurity.

Speaking after his turbaning, Mustapha said that he was delighted to be recognised and the honour would spur him to contribute more to his community.

Mustapha thanked members of the Ilorin Emirate and the Emir of Ilorin, Alhaji Ibrahim Sulu Gambari, for the honour.

NAN reports that Governor AbdulRahman AbdulRazaq of Kwara State, his deputy, Mr Kayode Alabi and Deputy Gov, Edward Onoja of Kogi, were among the dignitaries that attended the event with a horse ride and cultural display.