The federal government on Thursday, October 21, re-arraigned Nnamdi Kanu, the leader of the outlawed Indigenous People of Biafra (IPOB) at the Federal High Court in Abuja.

Before his appearance in court, the federal government had filed an amended seven-count charge bordering on treasonable felony and terrorism against him.

At the resumption of his trial on Thursday, three major things happened:

Prior to the commencement of Kanu's trial, there was mayhem at the venue following the activities of some hoodlums.

This started when the publisher of Sahara Reporters, Omoyele Sowore, tried to gain access into the court chamber where the trial is to be held.

While Sowore was discussing with security agents at the entrance, he was attacked by at least 20 thugs who rough-handled him.

It was gathered that the security agents arrested some of the hoodlums.

At the resumed hearing, the amended charges of treasonable felony and terrorism were read to the IPOB leader.

He, however, pleaded not guilty.

Since he was brought back to Nigeria, Kanu in line with a court order has been in the detention of the Department of State Services (DSS).

However, after pleading not guilty at the court on Thursday, the IPOB leader's legal team made an application asking for his transfer to Kuje prison in Abuja.

The court rejected the application and ordered his return to the DSS custody while the trial was adjourned till Wednesday, November 10. 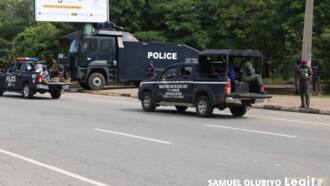 Meanwhile, Senator Ifeanyi Ubah has sought an order of a Federal High Court, Abuja to grant him access to visit Kanu at the DSS's headquarters.

Speaking to journalists in front of the court after filing the application, Ubah said he made the move in order to find a solution to the security crisis in the southeast region.

Ubah, 50, is the candidate of the Young Progressives Party (YPP) in the forthcoming Anambra governorship election.

Similarly, traditional leaders in the southeast have demanded the release of Kanu by the federal government.

The leaders under the umbrella of the South East Council of Traditional Rulers urged President Muhammadu Buhari to release Kanu to the Igbo traditional and religious leaders.

The monarchs made the demand in a statement released on Tuesday, October 19, 2021.