A Nigerian couple Luis Agada and Lucy Agada are the latest parents in town as they welcomed quadruplets - two male and two female.

The couple who tied the knot in April 17, 2010 have now ended their 11-year wait for the fruit of the womb.

The brother of the husband Luke Agada announced the development on Facebook.

Describing it as a big miracle, Luke appreciated God for blessing the couple with their own kids. 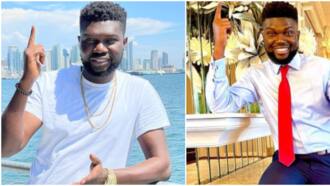 He urged people also believing God for fruits of the womb to not lose hope as theirs is also on the way.

People felicitate with the new parents

"Congratulations bro! What God can't do does not exist...May God bless and keep the children in Jesus name! Amen!!!...The parry is just beginning."

"Our God is truly faithful! This calls for a big celebration.

"Jehovah over do,name changer, the one that honors His world's more than His name may His name alone be praised for ever , congrats, may God watch over your family in Jesus name Amen."

"Wow! Wow!! Wow!!! What an awesome God. This is simply God's work in action. Congratulations Luis.

"The God who has manifested his work in the life of these children shall continue to keep and be with them IJMN. Amen!" 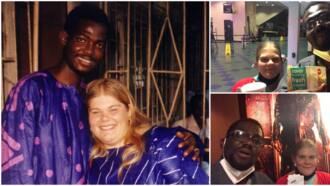 Oyinbo woman shares photo, gushes over her Nigerian husband as she celebrates their 16th wedding anniversary

"Miracle worker,wonder working God,only him alone deserve this praise,at the appointment time he gave double double for their trouble to shut the mouth of the devil.God be praised."

Meanwhile, Legit.ng previously reported that a Nigerian woman had given birth to quadruplets after 16 years of waiting.

Mr Chika Nwokike, in an Instagram post by LindaIkejiblog, and wife Chinyere Nwokike welcomed of two boys and two gi*rls.

Pictures of the couple who were alongside a priest of Catholic Archdiocese of Onitsha, Rev. Fr. Obum have stirred huge reactions on social media. Many expressed surprise at the feat and congratulated them.