Cristiano Ronaldo has revealed he has no intention of hanging his boot at the international level with Portugal despite his 37th birthday fast approaching.

The Man United striker made this known in an interview with Sky Sports and cited on Goal and UK Sun.

Recall that Ronaldo became the all-time top scorer in men's international football last month after bagging a brace against Ireland.

He surpassed Ali Daei's previous record of 109 for Iran and has since pulled further ahead - now sitting on 115 goals.

But the 36-year-old wants to keep winning with his country and has now shrugged off suggestions that he could retire from international duty with Portugal.

"Why? I think it's not my time yet," Ronaldo told Sky Sports News when asked if he was considering international retirement.

He added: "It's not what people want, it's what I want.

"It's when I feel that I'm not capable to run, to dribble, to shoot if the power is gone but I still have that stuff so I want to continue because I'm still motivated. It's the main word - [motivated] to do my stuff, to make people happy and my family happy and the fans and myself. I want to put the level even higher.

"You speak about Portugal but in the Champions League I have the most goals, the most wins, assists, everything. But I want to carry on. I like to play football. I feel good to make people happy." 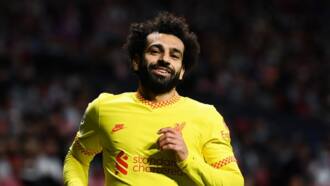 Earlier, Legit.ng reported that Cristiano Ronaldo has called for sacrifice from his teammates to help Man United upturn their recent poor form in the Premier League.

However, the 36-year-old was quick to admit that Man United still need time to gel following the arrival of Jadon Sancho, Raphael Varane, and himself at the beginning of the season.

Despite a bright start to the season, Ole Gunnar Solskjaer's men have suffered a poor run of form which has seen them fail to pick up a win in their last three Premier League fixtures.

They now sit in the 6th position on the Premier League table and are already five points off leaders Chelsea after eight games.

But Ronaldo believes his experience, as well as goals, can help Man United turn around their domestic struggles. 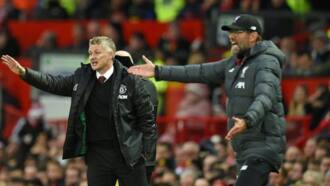 Klopp speaks on similarities between Ronaldo and Salah

Legit.ng also reported that Liverpool manager Jurgen Klopp has spoken about the similarities between Mohamed Salah and Cristiano Ronaldo ahead of his side's trip to Old Trafford to face Man United on Sunday, October 24.