Jose Mourinho suffered his heaviest defeat as a manager during Roma's 6-0 loss to Norwegian side Bodo/Glimt in their Europa Conference League fixture.

Mourinho takes selfies with children before game against Bodo/Glimt

The Portuguese gaffer however put smiles on the faces of children before the game as he went into the stands to take selfies with the kids, Instagram, Syri.

The Special One's act of kindness was caught on camera at the Aspmyra Stadion where the children were excited to meet the legendary manager of the Serie A club. 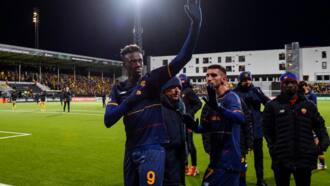 Mourinho's men would end up losing the game by 6-1 in a match he would never forget in a long while.

The Norwegian side were 2-0 up after just 20 minutes through Eric Botheim and Patrick Berg before Carles Perez pulled one back eight minutes later.

Mourinho took responsibility for the loss as he claimed that he decided to use fringe players to give them opportunities to showcase themselves.

“I’m the one who decided to play with the team we use tonight, so it’s my responsibility. 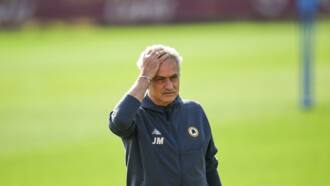 “I did it with good intentions and to give opportunities to those who work hard and also give a rest to some guys. Tonight we lost against a team with more quality, it’s as simple as that.

“If I could use the same players every match I would. It’s risky because there’s a huge gulf between our first choice and second choice players. I expected better, but it’s my responsibility.”

Meanwhile, Legit.ng had earlier reported that Roma boss Jose Mourinho has emerged as one of the favourites to replace Steve Bruce at Newcastle United after Saudi Arabian billionaires bought the Premier League club.

Although, the fate of the current manager is yet to be decided, however, following their 3-2 home defeat to Tottenham Hotspur over the weekend, a change of guard might be imminent.

Meanwhile, the 58-year-old Portuguese has admitted that he has an emotional connection with the Baggies due to his relationship with legendary Sir Bobby Robson, but insists that he is happy at his current job. 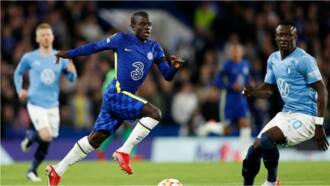