Abuja - High Chief Raymond Dokpesi, the chairman emeritus of DAAR Communications Plc has said he would not rest until Nigeria becomes a better country for all citizens.

The media mogul made the remake at a birthday lecture and book presentation as part of activities to mark his 70th birthday on Friday, October 22, in Abuja, Leadership reports.

Dokpesi, a chieftain of the Peoples Democratic Party (PDP) promised he would not rest until the inconsistency in Nigeria is fixed and made a better place. 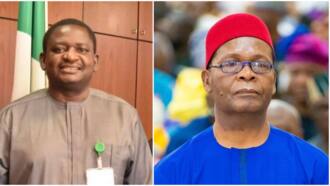 In another report by The Nation, the politician called on youths to defend democracy and unite toward a prosperous and progressive nation.

The PDP chieftain urged yound people to remain committed to the cause of building a better and advanced nation to make it a better place.

Dokpesi insists on northern presidential candidate instead of south

This development is coming after the former chairman of DAAR Communications drummed support for the PDP presidential ticket to be zoned to the northern region.

Dokpesi, a member of the oppositiobPDP) BoT is canvassing for a northern presidential candidate despite calls by southerners to produce the next president.

In an interview with The Guardian, Dokpesi revealed there is a constitution of the PDP, which states very clearly that there shall be rotation and zoning of both party offices and political offices.

Meanwhile, southeast leaders on Monday, October 19, condemned the recent comment made by Dokpesi, over the call for an Igbo president come 2023.

The Council of Igbo Elders warned that the people of the region are not desperate for the 2023 presidency to warrant such a comment from Dokpesi.

In a reaction to Dokpesi's statement, the chairman of the Council of Igbo Elders, Emmanuel Iwuanyanwu described the media mogul's remark as unfortunate.