They've made it in life: Reactions as boys jubilate after allegedly 'obtaining' Laycon's shades at an event

Popular Nigerian singer and BBNaija 2020 winner, Laycon is the latest celebrity who has been a victim of fan theft at events.

It is not surprising to hear that celebrities lose their personal effects during concerts to overzealous and mischevious fans.

In a video which has made rounds on social media, two boys were seen bragging and rejoicing over the fact that they collected Layon's shades at an event.

The boys showed off the item and even called on Laycon in the video to see that they had indeed taken possession of his belonging. 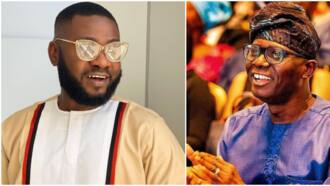 Stop swearing for me: Actor Jide Awobona cries out as Nigerians mistake his IG handle for governor Sanwo-Olu's

A lot of people found the video hilarious and had funny comments about the boys. Read some of the comments sighted below:

"I hope you can now see the future as una don collect the glasses."

"Timetable will start on top this glasses now."

"They have made it in life."

"Micheal Jackson fans no do pass this one."

"chaiiii. If you are from Ekiti gather here make we pray for them."

"Why Ekiti? I apologize on behalf of my people please."

Big Brother Naija Lockdown winner, Laycon is no doubt a favourite on and off social media, and he gave reasons why his female fans love him. Oyinbo lady dresses in Yoruba attire as she marries Nigerian man, groomsmen try to prostrate for her dad

The video had five captions with each giving a reason he is a ladies man. First on the list is the fact that he can sing and rap, followed by being a handsome man, a good head on his shoulder, money, and his 'masculinity'.

While fans of the rapper agreed with his highlights, others ruled out the fact that he is good looking.

EPL: I’ll write a book about you – Klopp hails Liverpool’s Origi after 1-0 win at Wolves 0

EPL: Chelsea’s defeat not important to us – Jurgen Klopp 0

Mr Dutch Mr. Dutch and Chief Priest are high off life in the video

SOME South African banks are threatening to freeze accounts of Special Zimbabweans Exemption Permit holders if they don't provide new documents in January 2022.One of

ZOE Mukura's family has no idea when she will be allowed to return to Canada.In September, Mukura travelled to Zimbabwe from her home in Saskatoon

PRESIDENT Emmerson Mnangagwa has signed into law the controversial Cyber Security and Data Protection Bill, which passed through the Senate in July 2021 and was

THE ruling Zanu-PF has ordered the struggling public transporter, ZUPCO, to avail 30 buses this Saturday to ferry thousands of party supporters who will attend