Teachers of demonstration primary and secondary schools in Rivers State alongside the Rivers civil society organization on Monday, staged a ... 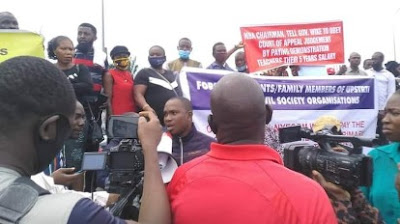 Teachers of demonstration primary and secondary schools in Rivers State alongside the Rivers civil society organization on Monday, staged a protest at the venue of Nigeria Bar Association conference at the Yakubu Gowon Stadium in Port Harcourt.

The teachers are demanding the payment of their five years salaries.

The attendance of the Rivers State Governor Nyesom Wike at the event may have prompted the teachers to stage the protest at the NBA conference venue.

Some of the aggrieved teachers regretted that the state government has ignored their plights despite a series of protests over the issue.

The appealed to lawyers to prevail on the state government to obey the court of appeal judgement which was in their favour.

Also speaking on behalf of the protesters, chairman of the Rivers civil society organization Enefa Georgewill questioned the state government’s refusal to pay the salaries of the teachers for about five years.

According to him “the office of the Rivers State Governor is a creation of law and if a court of competent jurisdiction has given an order, for goodness sake everybody must obey.

“You said that they are collecting school fees therefore they should pay themselves but the question is; are they the vice Chancellor that is controlling the fund?

“We don’t have issues with the governor but we are saying that the governor should do well to obey the subsisting court order.

“That is not too much for the teachers to ask for.”

The chairman of the Ikwerre Local Government Area of the state, Samuel Nwanosike, who addressed the protesters, pleaded with them to leave the arena and advised that a meeting be held with the commissioner of police with the aim of resolving the issue.

He said “Governor Nyesom Wike is on record to have paid the salaries of even teachers he did not employ.”

The protesters later proceeded to the state police command headquarters where the commissioner of police, CP Friday Eboka, promised to invite stakeholders on a later date for another meeting.