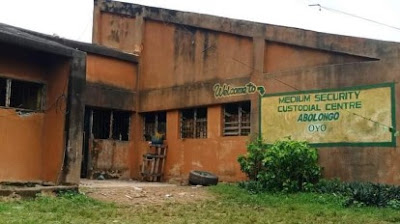 He warned the federal government to tighten security across various prisons facilities in the country, to forestall future jailbreak.

Abdullahi, who is a card-carrying member of Peoples Democratic Party, was reacting to the recent Abolongo jail break in Oyo where 837 awaiting trial inmates escaped.

He noted that the criminal elements were gaining ground beyond what ordinary man thinks.

“I wonder why within one year, there have been reported cases of jailbreaks twice. One happened in Kotokarfi Kogi State, early this year, and the recent one in Oyo. In each of the jailbreaks reported, the number of criminals; some condemned, some awaiting trials are overwhelming.”

He said the most painful aspect is that, immediately there is jailbreak, and the minister has gone to inspect the facilities with all feedback, everything ends there.

“Up till now, we don’t know the actual number of prisoners rearrested, in Kotokarfi, and those who went away.

“Look at the recent jailbreak in Oyo, we were informed that some prisoners were re-arrested. In the next few weeks, the public will not hear anything about it again. Nigerians will not hear any feedback from them again,” he explained.

He said those hardened criminals, who escaped during the jailbreak, posed a great danger to the society.

He called on the federal government, the security agents to beam their search lights on various prison facilities across the country with a view to ensure that the mistake of the past doesn’t repeat itself.