The federal government has started to value the properties of some former public servants in a bid to ascertain their financial worth and sell them to potential buyers.

Among persons whose assets have been listed for this process is Diezani Alison-Madueke, the embattled former minister of petroleum resources, Punch reports.

Another ex-official government on the list is the late Chief of Defence Staff, Air Chief Marshal Alex Badeh.

Below is the list of the assets slated for sale: Alleged fraud: EFCC discloses how it recovered jewellery worth N14.4 billion from Diezani

Meanwhile, the Economic and Financial Crimes Commission (EFCC) had disclosed that jewellery worth N14.4 billion was forfeited by Alison-Madueke.

The chairman of the commission, Abdulrasheed Bawa, made the disclosure on Friday, May 28, when he appeared before a committee of the House of Representatives probing the status of recovered loot.

Bawa told the lawmakers that the estimated value of the houses seized and forfeited from Diezani was $80 million.

The EFCC boss stated that the commission is yet to auction assets and property recovered from the former minister due to administrative exigencies. 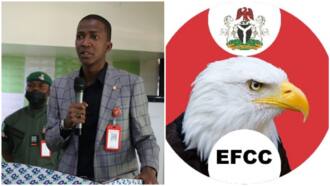 NIMASA boss to EFCC: Probe N1.5trillion allegation against me

In another development, the director-general of the Nigerian Maritime Administration and Safety Agency (NIMASA), Bashir Jamoh, had asked the EFCC to investigate an allegation of N1.5trillion fraud levelled against him by one Jackson Ude.

Ude, a Nigerian journalist based in the US, had on Saturday, May 22 tweeted that N1.5trillion was traced to Jamoh in a new generation bank.