Honourable Chinedu Obidigwe, a member of the House of Representatives representing Anambra East and West, has reacted to claims that he was arrested by the police for gunrunning.

There were viral reports from some online local newspapers that Obidigwe's convoy was intercepted by a combined team of policemen and soldiers on Sunday, October 24.

The questionable publications said persons accompanying the lawmaker had with them not less than 54 Ak-47 Rifles, 119 Pump Actions, and other ammunition. 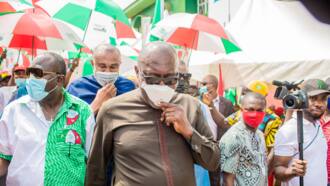 However, in a video shared on his Facebook page on Monday, October 25, Obidigwe described such reports as "fake news, very false, and criminal in nature."

The lawmaker said as a member of the All Progressives Grand Alliance (APGA), he and his colleagues travelled to Abuja to have an interactive session with the party's candidate for the forthcoming Anambra gubernatorial election, Charles Chukwuma Soludo.

Obidigwe said as a custodian of the law, he cannot stoop so low as to get himself involved in any form of crime.

He, therefore, called on the reading public to disregard the report promoted by persons who will face the wrath of the law very soon.

Anambra 2021: Battle to take over from Obiano begins

Meanwhile, ahead of the forthcoming governorship election in Anambra state, APGA had flagged off the election campaign of Soludo, former governor of the Central Bank of Nigeria (CBN). 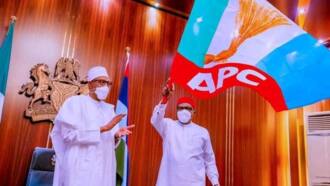 The rally took place at the Alex Ekwueme Square in Awka, the state capital on Saturday, September 25.

Soludo was formally presented as the candidate of APGA in the November 6 election, a routine act that signifies the politician is the authentic candidate of the party.