An 81-year-old woman has celebrated becoming the latest millionaire at an old age.

Legit.ng learnt that the cash gift is for her video entry as regards the social media challenge centred around his latest release titled Levels. In a video the singer shared on his Instagram handle, the old woman appreciated him for making her a millionaire.

She advised people not to rush life

Mama Social while affirming that she never saw herself becoming a millionaire at an old age advised people to take life easy.

The octogenarian added that no time is too late and that grace differs by person.

@mcshade_comedy, handler of the platform the old woman makes content with said:

"Thanks a bunch @2niteflavour for the love,may the good lord keep blessing you for showing us love ❤️❤️" 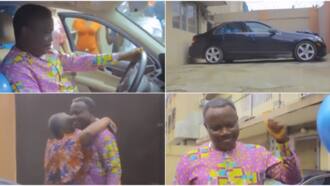 "Flavour nwokeoma, thanks so much am proud of you for choosing mama social."

The car gift recipient named Dede via a series of posts shared on his Instastory channel disclosed that he was given a car by his boss and friend, Flavour.

He thanked the singer for the gift while also saying a word of prayer for him.

"Thanks 2nite Flavour for this beautiful gift. God bless you," one of his caption read.

Dede also posted another photo that captured him and the singer posing together with the new car that had just been given to him.