Tributes have been paid to the "pioneering" BBC journalist Sue Lloyd-Roberts, who died on Tuesday aged 64.

She ran a public appeal to find a donor and kept a video blog on her illness in which she said in August that she had been confined to bed with pneumonia.

Among those paying tribute to her was Myanmar opposition leader Aung San Suu Kyi, who praised her "great courage".

Ms Lloyd-Roberts, who had also worked for ITN, reported on events in Syria, Burma and North Korea among many others, and campaigned for human rights.

"She went to dangerous places to give a voice to people who otherwise would not be heard," he said.

"She was quite simply a remarkable woman who got remarkable stories. She will be deeply missed."

Aung San Suu Kyi, the opposition leader in Myanmar, also known as Burma, said: "Sue Lloyd-Roberts showed great courage and commitment in reporting from Burma during some of our darkest days, and exemplified my belief that the best journalists are also the nicest."

She worked as a journalist for ITN before joining the BBC, reporting on issues including human rights abuses around the world.

In 2011, she was the first journalist into Homs - the so-called "capital of the Syrian revolution".

Also during her career, she was sentenced in her absence in China to seven years in prison for her reporting, and was one of the first journalists to talk about female genital mutilation.

She was appointed MBE and CBE for her humanitarian journalism.

She also received the European Women of Achievement Award and won an Emmy for her reporting from North Korea.

Ms Lloyd-Roberts was married to BBC producer Nick Guthrie and the couple had been living in Spain, where they ran a rural hotel.

She wrote a number of articles for the BBC Magazine. Here are a few of them:

She wrote a number of articles for the BBC Magazine.

Here are a few of them:

A US soldier searches for his Vietnamese son

The unopened 'Pleasure Hospital' of Bobo

Demanding justice for women and children abused by Irish nuns

Earlier this year she said she had "always joked that the part of my brain that recognises fear doesn't exist".

Describing being shot at in Bosnia, she told the Daily Mail such situations make people "scream or pray".

"But I picked up my camera," she said.

"Concentrating on filming displaces you from what's going on. There is nothing better at dispelling fear than having something constructive to do."

She called her illness "unnerving", adding: "When I was working, the decision to go into a dangerous situation was a conscious one. Now it's different. My life is at risk and it's not of my choosing." 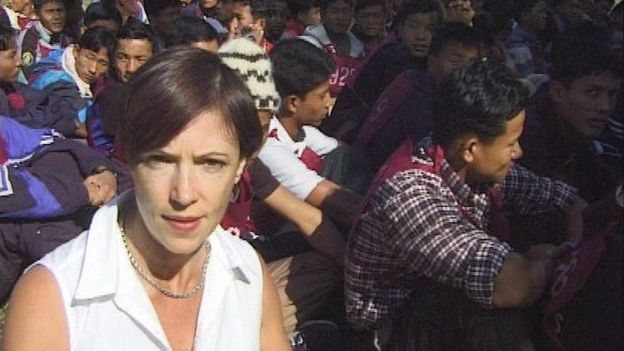 Many paid tribute to the journalist, including these tweets from Channel 4's political correspondent Michael Crick and BBC newsreader Huw Edwards.

Jeremy Bowen, BBC Middle East editor, described her as a "brilliant and indefatigable journalist", while the BBC's chief international correspondent Lyse Doucet said she was a "brave journalist, kind colleague and wonderful person".

The BBC hosted an open day in June to encourage potential stem cell, or bone marrow, donors to come forward after Ms Lloyd-Roberts missed out on a transplant in May when a previous candidate failed a medical.